skip to main | skip to sidebar

A blog is for life, not just for xmas

There is something quite depressing and unsatisfying about abandoned blogs. Unfinished narratives left permanently hanging in cyberspace.

Bloggers always start out so committed to their project, full of ambition as to where it could lead and a desire to tap into an audience of like minded enthusiasts; home brewers, dog breeders, photographers, bakers, first time mothers. Their readers emotionally invest in their story and get hooked, eager for the next instalment in the blogger’s adventure. But after those first committed weeks, months, even years of regular blog posts, signs of neglect start to appear. Posts become more and more infrequent, the blogger sounds a little bored, preoccupied or despondent if things aren’t going quite to plan, often starting the post with an apology ‘sorry I haven’t written for so long’. And then, inexplicably, nothing. Communication is cut off and readers are left wondering what happened, returning to the blog every now and again in the hope that there’s been more activity, only to be faced again, with that final blog post and no explanation.

Scramblingeggs looked in real danger of becoming yet another cyber statistic. Apparently 95% of blogs are derelict - virtual landfill that clog up cyberspace for eternity. After 7 years of documenting my progress in setting up and running 1, 2 then 3 Australian style cafés in London, it suddenly went quiet in July 2013.

I’m here to reassure any committed Scramblingeggs followers that nothing drastic has happened. I’m still alive, the cafes haven’t failed and I haven’t waivered from my commitment to save the Brits from bad brunches. I’ve just been busy. Very, very BUSY. While I may not have any blog posts to show for it, I do have a little boy with a sibling due in less than a week, a house with a new kitchen and ongoing renovations, 3 busy cafes and most importantly a Lantana Cookbook; Café Kitchen, which was my main writing project of the year. 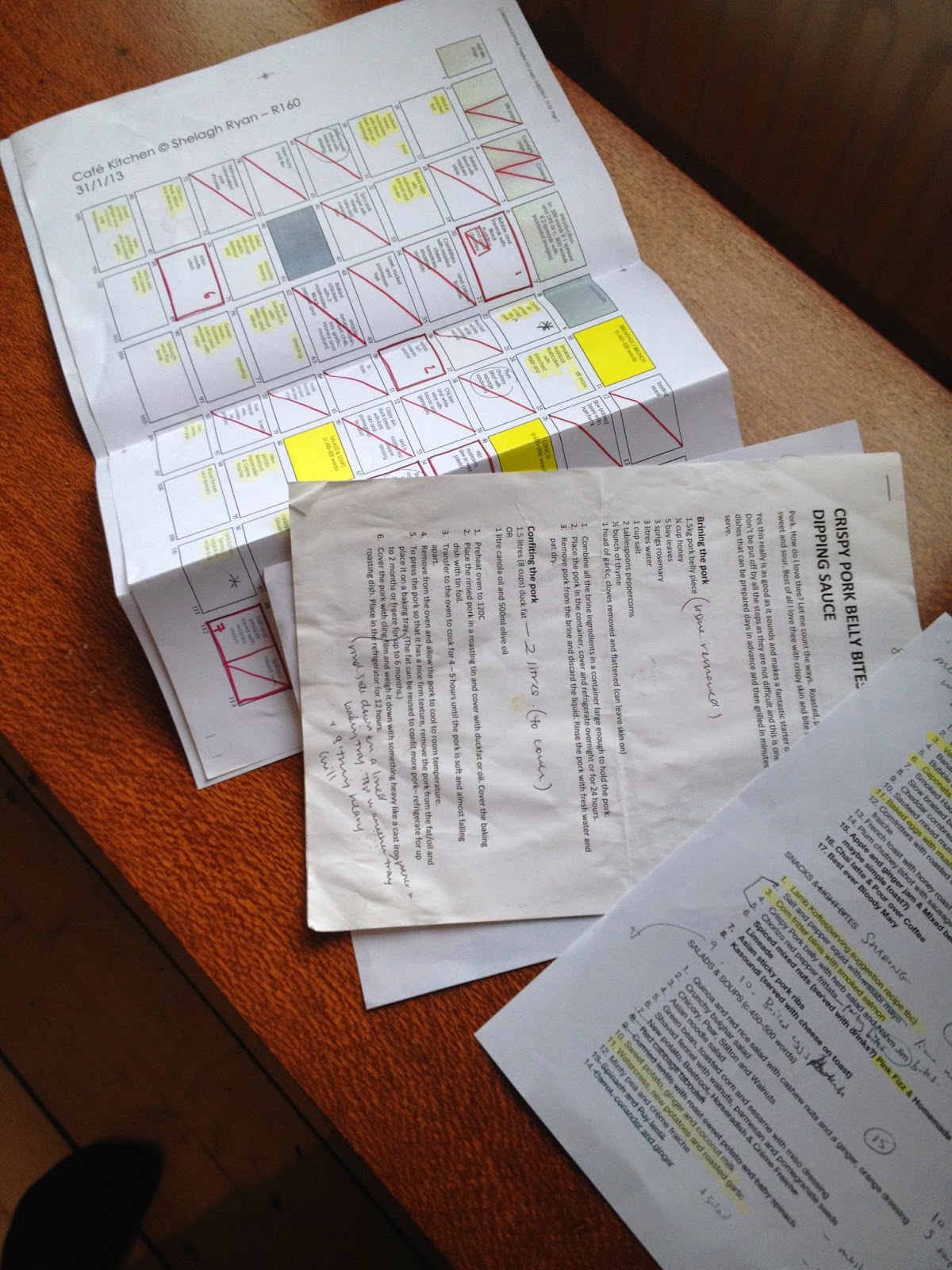 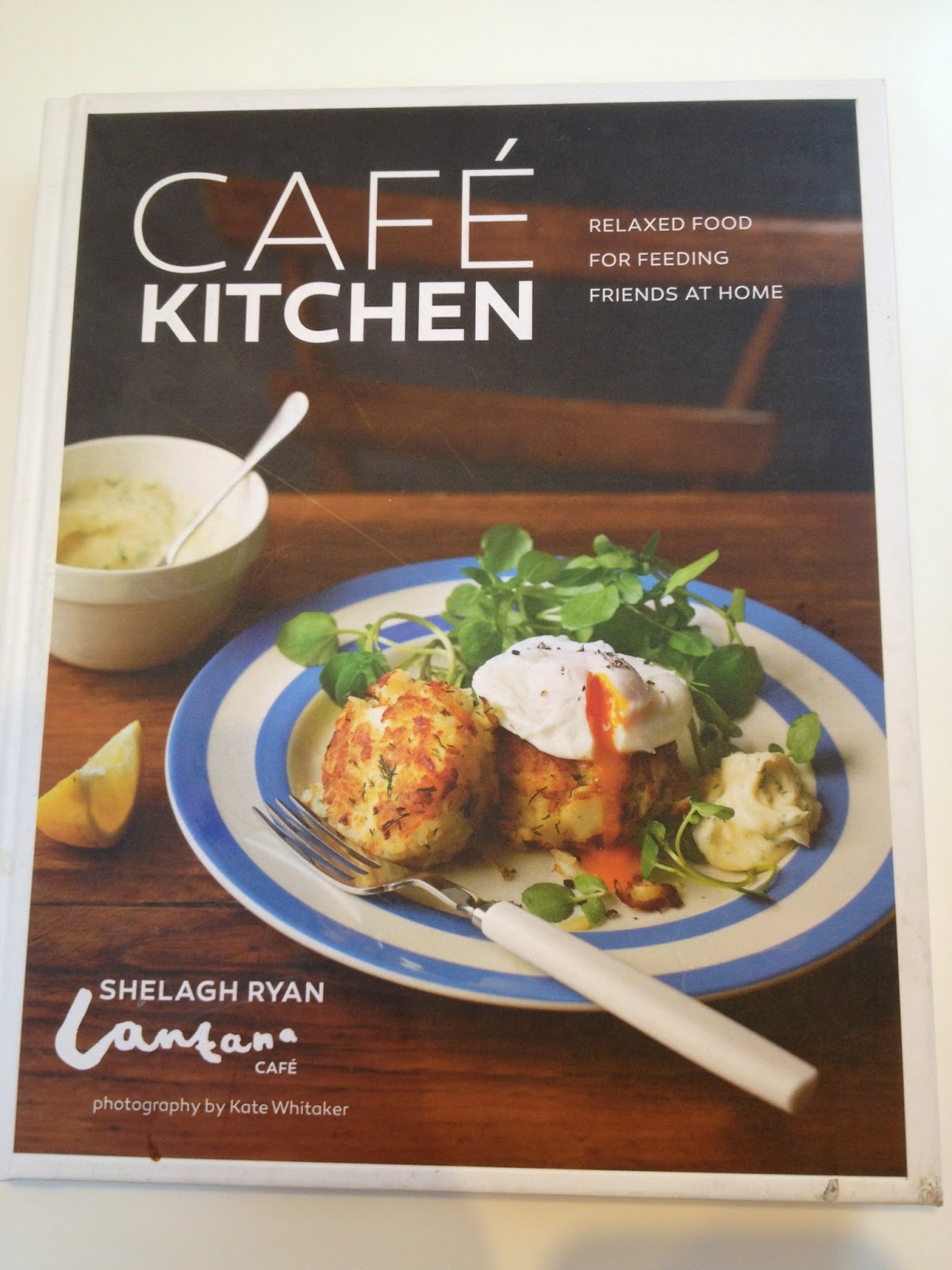 While I have felt bad about temporarily neglecting my blog, it’s comforting to know that I’m in good company. Just looking down my list of recommended blogs on Scrambling Eggs, I find 3 of the 13 haven’t been updated in over a year. Some of my favourite bloggers have left me in a state of limbo; eggsbaconchipsandbeans – reviews of the best greasyspoons in the UK, Mister Barista – a 'cafe sink' drama narrated by an astute barista and lilyandchew - recipes and stories from a North London vegetarian gourmand. I suspect their reason for abandoning their blogs is similar to mine; too busy to blog.

Hopefully 2015 will see me and other bloggers at the keyboard a little more frequently. If only to take down any abandoned blogs. Til then, x.

And if you're looking for the perfect Christmas gift - look no further. Everyone should have a little bit of Lantana in their very own kitchen. 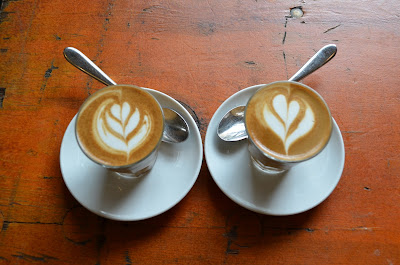 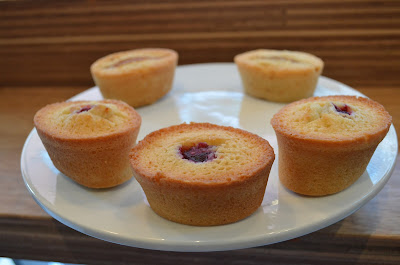 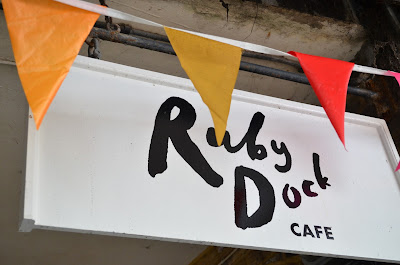 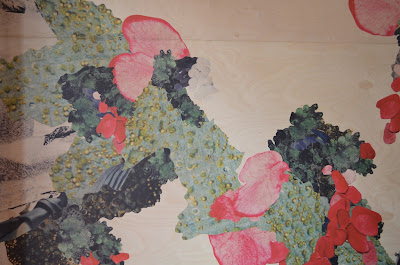 Like her parents, she's named after a beautiful flowering plant which was introduced into Australia where it thrived to such an extent that it out competed the native flora and is now regarded as an invasive weed.  Ruby Dock, which is native to the desert areas of North Africa and India, was thought to have been introduced into Australia with camels in the 19th century as part of colonisation. It’s seeds are wind and water dispersed and it is commonly found along watercourses.

Now Ruby Dock has blown into Camden and put down roots by the canal where it has already won fans who are delighted to find shady respite from the noise and congestion of the market. 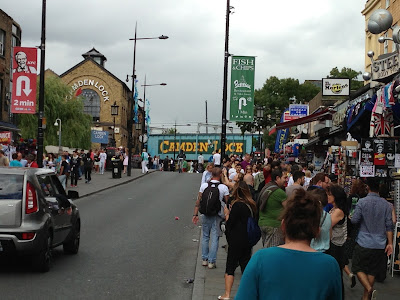 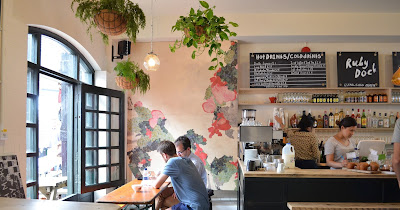 But blink and you'll miss her as she's a pop up: in this location for 12 months only. During the day she’s serving up delicious breakfasts and lunches and of course, coffee and cakes, and when night falls and the tourists disappear, its wine, beer, cocktails and on trend hot dogs.

So come up and visit the new weed in Camden town. 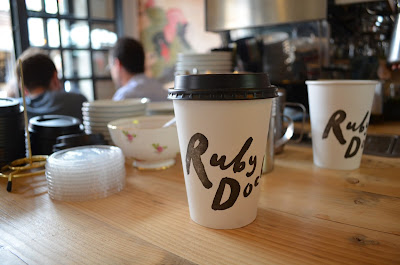 Opening Times:
Monday and Tuesday from 8am to 5pm
Wednesday to Friday 8am to late
Saturday 9am to late
Sunday 9am to 5pm.

The butcher, the baker, the candle stick maker

Rub-a-dub-dub,
Four men in a tub,
And who do you think they be?
The Wandering Chef, the Thinkers Balcony, the Candle Stick Maker and Salvation Jane’s very own Head Chef, Tim.
All put out to sea.

It wasn’t a sailing expedition that brought these four whimsically named* men together last Saturday night, but a culinary one, “Supper Club Saloon”, to celebrate the launch of Melba.
*Note to Tim: come up with a quirky alias like… the “Kiwi Chef”?

For one night only, Salvation Jane turned her kitchen over to chefs who regularly host their own Supper Clubs and Pop Ups in venues throughout London. The challenge for these lone rangers was to collaboratively devise a four course menu and cook along side each other for 50 guests. 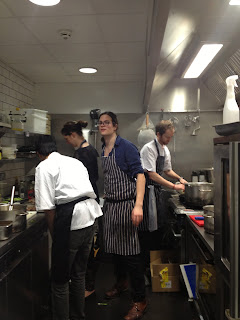 There were quite a few Masterchef moments 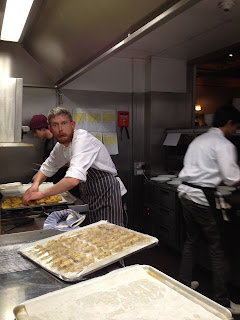 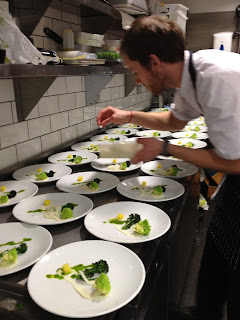 But on the whole the chefs kept their cool, no one sliced a finger off, and the punters devoured every morsel. 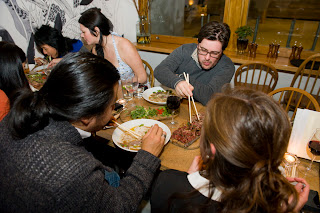 If I had to pick a winner, I’d say it was the Kiwi Chef with his starter. A home side advantage, or a biased judge?


The other dishes on the Asian themed menu: 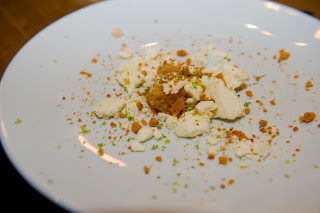 Thank you to all the chefs, diners and Melba for a wonderful night. 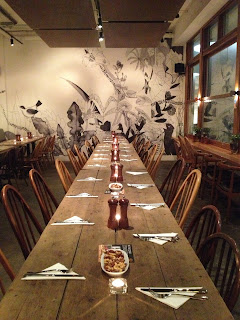 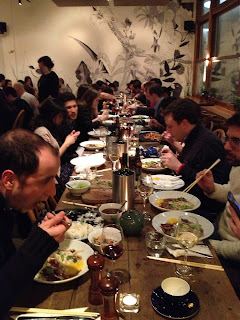 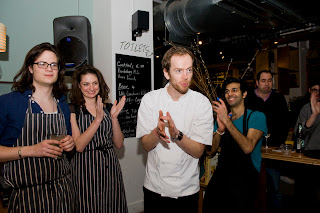 Thank you also to Antonia Pena for many of these photographs.

Thanks for the memories

I don't want to holiday in countries where the people aren’t passionate about their food. It's not a statement that I'm particularly proud of.  I feel it makes me sound a little shallow, dare I say greedy, but a large part of the enjoyment of any holiday for me is eating. I know you could argue that every country has its culinary gems and sometimes as a tourist you just have to work a little harder to seek out, say, the best pork knuckles in a country like the Czech Republic, slowly sinking under the weight of its national cuisine.

When holidays are as few, short and precious as mine, I want a sure thing. Easy wins. A gastronomic guarantee.

Ciao Sicily. The Italians’ obsession with food and seasonal produce hits you at every turn. 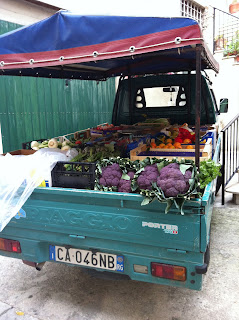 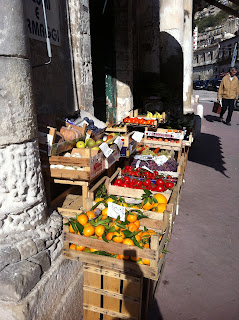 The thing that strikes me most about Italy, particularly after living in London for a few years, is how proudly untrendy Italian food is.  The London food scene is an ephemeral creature, constantly changing as it embraces the latest food trend.

I can barely keep count of the rash of burger joints and southern BBQ diners opening across London. Last year London dining was all about small plates, sliders and Argentinian steak. In complete contrast, the Italians have a national cuisine and restaurant culture which is determinedly oblivious to fads and food trends. Their cuisine is deeply entrenched, regional, seasonal and seemingly unchanging. Even in Sicily, a part of Italy that has been repeatedly invaded, the culinary influences of the Greeks, Spanish and Arabs, while present, never overshadow the strong Italian backbone of the cuisine.

Just because Italian cuisine is unchanging, it is by no means unexciting. Ironically, Italian chefs appear even more creative when they are able to breathe fresh life into the dishes and combination of ingredients that have been cooked and eaten for generations.

Nowhere was this more poetically demonstrated than at La Madia; an unassuming restaurant, hidden in a small industrial town in Southern Sicily, that's deservedly attained Michelin status. Every dish was unique, inventive and indescribably delicious, yet firmly underpinned by Sicilian classic dishes and ingredients.

The chef, Pino Cuttaia, in explaining his approach to cooking in the introduction to his menu, sums up the Italian food philosophy:

"I am always asked if there is a food product in my kitchen I couldn’t live without or an ingredient that best represents my way of cooking. Actually there is one ingredient that more than any other defines my idea of cooking. My secret ingredient is my memory. Each one of my dishes has a sprinkle of memory in it." 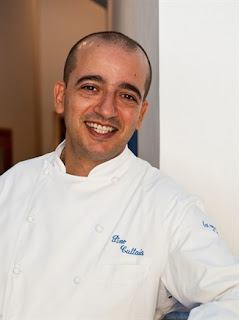 Thanks for the memories Pino.

Shelagh Ryan
13 Charlotte Place, London W1T1SN, United Kingdom
This is a story about a little girl, in stature rather than age, who traveled all the way to London from Melbourne Australia to open a café. Task: convince the Brits that there are better ways to start the day than with their most significant export, "the Full English"; Experience in running a cafe: none; Optimism: high. I’ve decided to keep a blog so that I can either press print and sell millions of copies of my amazing success story, or give those who are secretly thinking she'll never pull it off, an opportunity to see why.